We really need more online reviews of The Complete Gettysburg Guide on Amazon.com and BN.com... everyone who can put up a new review of the book beginning today (July 28), please email me at jdpetruzzi@live.com, and we will tell you about a special offer we and our publisher have for you. Clicking on the links above will take you to the book's pages on those sites. Please place your review on the sites, then email me for details. Thank you!
Posted by J David Petruzzi at 11:11 AM 1 comment:

After a couple weeks of finally "gittin' stuff done" around the house and catching up on lots of things, I have been talking with Steve Stanley about our upcoming projects. We're just now starting on what will be a digital companion to "The Complete Gettysburg Guide." We will have a downloadable and CD touring companion to the book that folks can take along and play in their vehicle and/or personal devices. In addition to including Steve's maps, the companion will complement and supplement the book with additional places to see and events to tour on the battlefield, in the town, and other places. Audio tours are extremely popular with folks, and many, many people have asked if/when we'll be doing an audio companion for the book.

This weekend I will begin writing the script, and Steve is starting to work on the package itself and the maps. If anyone has any suggestions, please pass them along to me. I will continually keep you posted here as to our progress!
Posted by J David Petruzzi at 2:23 PM 15 comments:

Wow, it was a whirlwind four days in Gettysburg from July 1 to 4. Steve Stanley, Mike Nugent and I had a busy time doing book signings almost constantly, but it was a lot of fun. It was really great seeing Mike, whom I hadn't seen since last summer.


The reception of The Complete Gettysburg Guide has been beyond our expectations, and we are truly humbled and grateful. Everyone has given us such wonderful comments about it, and we especially love hearing from those that have taken it out on the field and used it. But my buddy Steve Basic made the most poignant observation of all, and one I couldn't agree with more: if someone gives this book to, say, a ten year-old, and it sparks his interest in Gettysburg and history in general, then all the hard work was more than worth it.


Over the four days, we had a lot of book signings and talks at wonderful Gettysburg stores such as The American History Store, the Gettysburg Museum and Gift Center, Gallery 30, the Supply Wagon Sutler, as well as at the Gettysburg National Military Park Visitor Center. We also attended the Hunterstown Heritage Days over the anniversary of the cavalry fight there, on July 2.


On July 3, it was a special treat to speak in front of a large crowd under the Sacred Trust tent outside the GNMP Visitor Center. During our second book signing inside the VC that day, we were able to meet filmaker Ken Burns, who was signing his books beside us. Below is a pic of Ken, Steve Stanley, me, and Mike Nugent during a short break. 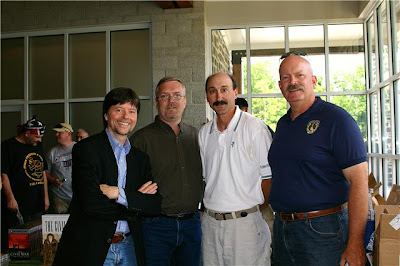 At Hunterstown, I spoke to the attendees about the book and also the preservation efforts going on at Hunterstown. Below is a shot of the talk. Laurie and Roger Harding are true gems as the coordinators of the Hunterstown Historical Society, and it was great seeing the dedication of the new Civil War Trails wayside on their historical property, the Tate farm. 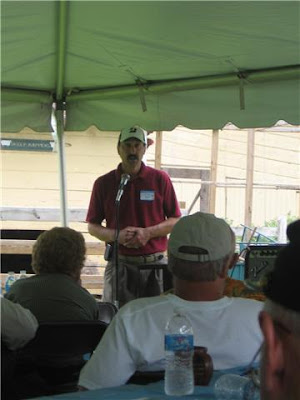 Below is a shot of Steve and I flanking wonderful Custer living historian, Steve Alexander, at the Hunterstown event as he holds his copy of the book. 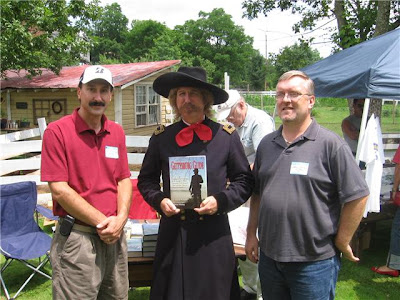 Here is a pic of me giving my talk during the Sacred Trust (Gettysburg Foundation) event in the tent outside the GNMP Visitor Center on July 3. We had a packed tent, and I got lots of great questions about the book. I think we signed about 40 copies of the book for folks, and we really enjoyed talking to people about the tours and places to see that are included. 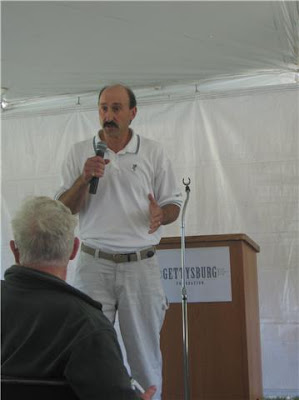 Charles Joyce is simply one amazing artist. When you visit Gallery 30 at 30 York Street in Gettysburg, check out his work. During our signing there on July 4, Chuck was having an exhibition of some of his work at the gallery, and I had to have my photo taken with him in front of some of his paintings. He is below on the left. 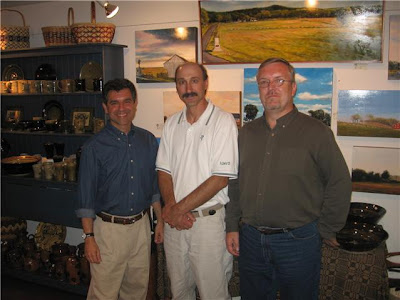 I'm very glad to be back home after this, my fourth trip this year to Gettysburg. But I can look back on many days of talking to many amazing folks about the book. Now it's time to take time to get some things done around the house! (Oh, and get back to my real job, too!)
Posted by J David Petruzzi at 8:43 PM 4 comments: