"One Continuous Fight" coming in paperback 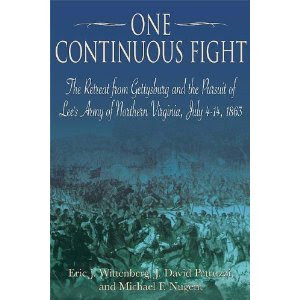 The 2008 book I co-authored with Eric Wittenberg and Mike Nugent, One Continuous Fight: The Retreat and Pursuit of Lee's Army of Northern Virginia, July 4-14, 1863 is being released in paperback by our publisher, Savas Beatie (click on the book title to be taken to the Amazon page for the paperback). The scheduled release date is January 1, 2011. For those of you who have been waiting for a paperback version of our popular book, now's your chance! A detailed narrative of the momentous 10-day period following the Battle of Gettysburg, our book gives a blow-by-blow account of the 23 battles and skirmishes that took place during the retreat - as well as a scholarly discussion of both army commanders' decisions during the movements.
Soon I'll also have a link to order a personally inscribed and signed copy from me on my website, so watch for that if you'd like to have one of those.
Posted by J David Petruzzi at 10:58 AM 2 comments: