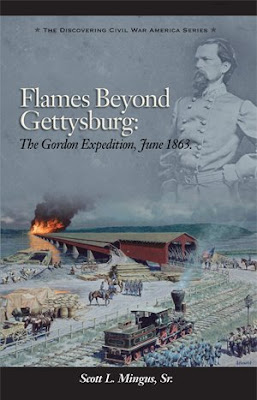 We at Ironclad Publishing are extremely proud to announce that Scott Mingus Sr.'s new book, Flames Beyond Gettysburg: The Gordon Expedition, June 1863 is now available! This is the fifth volume in our popular Discovering Civil War America series.
One of the most strategically important parts of the 1863 Gettysburg Campaign today is virtually unknown to the modern battlefield tramper. In late June, Confederate Brig. Gen. John B. Gordon led a vital expedition through south-central Pennsylvania with a goal of seizing the mile-long Columbia-Wrightsville Bridge over the Susquehanna River. Along the way, Gordon had to deal with hastily recruited and barely trained state emergency militia whose mission was to delay the Rebels for as long as possible and then deny them the use of the river crossing. This book offers the most detailed examination of Gordon’s mission. Chapters include a treatise on the first fighting at Gettysburg (a series of skirmishes on June 26), the subsequent cavalry raid on Hanover Junction, Gordon’s triumphal Sunday parade through York, and the skirmish at Wrightsville that doomed the Gordon expedition to failure. The book includes several detailed driving tours and a complete order of battle for both Gordon’s Georgians and the Pennsylvanians who opposed them.
This is a meticulously researched and wonderfully written book that any Gettysburg student, Civil War student, and ardent battlefield tramper will want to own. Click HERE to go to our webpage for the book to see more and to order a copy.
Scott is giving many talks to Round Tables and various groups on the subject, as well as lining up driving/walking tours of the areas that comprise the narratives this summer. Just contact me for more details.
We are very proud of Scott and his new work, and we know that this book will be the standard work on this little studied and appreciated facet of the Gettysburg Campaign!
Posted by J David Petruzzi at 6:55 PM 5 comments:

I just wanted to take a moment on behalf of my family to thank each and every one of you for all you have done for us following my mother's passing. I and we have received an outpouring of cards, calls, emails, texts, flowers etc. and each one of them is greatly appreciated. I guess it's true that one doesn't really know how many good friends are out there until you truly need them. I am blessed by the friendship and support of all.

It has been a very difficult week, but the support has made it less burdensome to bear. For the rest of my days, I will carry memories of my Mom. She was blessed with 80 years of a good life, and I was blessed to have her for nearly 44 years. My family chose to take me as their own, as with my sister, and I have so much to be thankful for - family, friends, love and support.

I cannot express how much every kindess has meant - not only at this time, but in the past.

Thank you, and God bless all of you. You have done more than you'll ever know.
Posted by J David Petruzzi at 11:51 PM No comments:

I lost my Mom, Marcella, this past Thursday morning, February 5.

My parents go to Florida each winter, from December to April. Dad is 81, and my mother turned 80 in October. I've always been happy that they both can get away from these often-rotten Western Pennsylvania winters, and this current one has been an especially cold and snowy one.

My father has had a few serious health problems over the past few years, but he's always bounced back and today is in pretty good health. My mother, on the other hand, has hardly had any health issues at all. But last week, she told Dad that she was beginning to feel very tired all the time, and had little energy. This from a woman who has been very active all her life - still golfing and swimming, playing bingo about every night. Concerned, Dad took her to see her Florida doctor, and she was entirely checked out. No problems found with the heart or anything else. He adjusted her medications, and she seemed better. But this past Wednesday, she was feeling tired again, and had to sit down after walking only 10 feet or so. So Dad made an appointment the following day (Thursday) to get her in to see the Doctor and try to figure out what might be wrong.

When she came down to breakfast Thursday, she told Dad she wasn't feeling well again, but was hungry. Dad made her breakfast, and was ready to take her to the hospital for her appointment. But she suddenly began to faint while in her chair. Dad grabbed her, and had to hold her up. Unable to reach his phone, he couldn't dial 911. He says she began to come out of it slightly and he went for his phone and started dialing. But then she began to fade again, looked Dad in the eyes, and she died in his arms.

The cause of death, they tell us, was a massive heart attack. She was gone before the paramedics got there. But thankfully, there was no pain, no suffering, no weeks in the hospital. Just a few days of the fatigue and difficulties. To think that my Mom would suffer at all would be too painful to me, so it was definitely a blessing that she didn't - so many do before the end comes. But she went quietly, peacefully, and in the arms of the man she spent the last 56 years with.

I know many of you have lost a parent, and no one knows how difficult it is until you do. You think of everything at this time - what your mother cooked, the little things she did for you, all the ways she took care of you. Few know this, but my sister and I are adopted - Mom couldn't have children of her own. My most treasured picture is one of my mother holding me as a 3-week old baby at the front door of St. Joseph's Home for Orphans in Erie, Pennsylvania as they prepared to bring me home. And I've always said that I'm twice-chosen - they adopted my sister there five years before me, and Mom and Dad decided that Lisa could go into St. Joseph's and pick out her own little brother. It was completely her choice. She walked into the room where all the babies were in cribs, went straight to the far corner, and put her hands on my crib. "I want him!" she told them.

I had a family.

We flew Dad back up from Florida Thursday night, and that first day was very rough for him. He's doing fine now, and having so many family and friends around has helped immensely. We've been spending much of the past couple days talking about all our memories of Mom. I never imagined for one second, though, that when they left for Florida in mid-December that it would be the last time I'd see her. It hurts to not have been able to be with her, but I'm thankful that Dad was with her at the end.

It also hurts that she wasn't able to see my new book when it comes out. Steve Stanley has been sending page images of it as he completes the layout for it, and I had been able to at least show her a few. She loved the fact that it's in full color, and she kept saying over and over how "pretty" it was. She was really looking forward to seeing it this spring. When I finally hold it in my hands, it will definitely be bittersweet. Mom knew that this book was the one I've been wanting to do for years, and partnering with Steve has been a blessing - it wouldn't be half what it is without him. When I first see it I will think of her, and hope that somewhere she's looking at it and feeling proud of me.

Most of my waking hours are filled with thoughts of her. I keep remembering how she would rock me to sleep when I was up to about 3 years old (yes, I can remember it) and sing Polish lullabyes to me that she learned from her mother. I can still remember the words, although I haven't a clue what they mean. I have the melody in my head, and it's something I'll never forget.

Her food. Her laughter. Her yelling. Her smiles. Sometimes watching her sleep during naps. Her hugs and kisses. How she'd try to swear in Polish when she was mad. How she loved golf and bingo. And the fabulous time she had at our house during our big family Christmas party just a few days before leaving for Florida. She absolutely loved it - especially when we played the little bingo game.

Because of those out-of-state delays, and since she is right now (approximately) on a plane somewhere being flown up her to Pennsylvania, the funeral won't be until Wednesday the 11th. For the viewing Tuesday, it'll be the first time I'll see her since they left. That will be very hard. As my friend Eric Wittenberg assured me, I am more than allowed to cry. Thank goodness, because I'm preparing myself to do lots of it. I expect to be quite skilled at it after a couple minutes.

Since Thursday I have felt much, much older than my nearly 44 years. I'm tired, my joints ache, and my insides feel knotted and empty. Everything that goes along with grief. But I just think of the good times, and that picture of Mom holding me right after the adoption. I don't ever want to leave that day. I wasn't able to comfort her like she did for me a thousand-odd times, but I can hold onto my memories. My wife Karen loved her like her own mother, and I'm so glad they knew each other these past nine years and did so much together.

Thank you for my life, Mom. I hope I have treated that gift well so far. I hope I made you proud of me. One day you can tell me yourself. Until then, your inspiration will carry me through anything life has to throw at me.

Thank you for the lullabyes. I love you.
Posted by J David Petruzzi at 9:38 PM 19 comments: 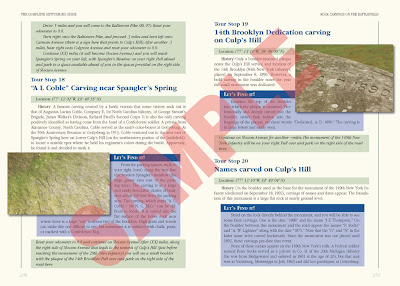 Above is a sample page image from the upcoming book by Steve Stanley and me - The Complete Gettysburg Guide. The page has been edited from this version a bit, but the layout, design, and colors will give you a good idea of the appearance of the book. All the maps are likewise in full color. This particular page is from the battlefield rock carvings tour.
Click on it for the big, honkin' version.