Need a reason to oppose the casino in Gettysburg?

Then watch this video.

It was played today in front of the PA Gaming Commission as part of a two-day hearing on the proposed casino. Gettysburg Borough Council and NoCasinoGettysburg organizer Susan Paddock asked me to testify, but because of a doctor's appointment today, and hand surgery tomorrow, I was unable. I feel horrible I was unable to attend, but I couldn't change the appointments. I was hoping to put together a panel consisting of fellow historians/authors such as Eric Wittenberg, Ed Longacre, Andrea Custer and others, but we all had scheduling conflicts. This just turned out to be a bad week to try to get folks together. I asked several folks, but they understandably had conflicts, and all felt bad about being unable to attend.

That video likely has more impact, though, than any of us could have mustered. Just listening to David McCollough talk about the sacredness of America's hallowed grounds should make everyone stop and think about what this stupid idea of collossal, galactic proportions would do to the area. As he says, it's simply trying to bank on Gettysburg - why not put a casino next to the Washington Monument, the Liberty Bell - hell, how about the White House? Either a place matters or it doesn't. If Gettysburg or any other such place can be cheapened by such a move, then let's get out the bulldozers and just plow the whole goddamn place under and bury the monuments. There's no "fence" - either you care or you don't. Make your voice heard.
Posted by J David Petruzzi at 8:18 PM 9 comments:

This upcoming Labor Day weekend, Steve Stanley and I will be at several book signings around Gettysburg. If you're in town, please stop in and see us. All of my books will be available, as well as our first volume of the Audio Tour based on The Complete Gettysburg Guide. Here is the schedule:

Hope to see many friends this weekend!
Posted by J David Petruzzi at 11:44 AM No comments:

A couple weeks ago, I was interviewed on the Law Business Insider radio show "America's Best Selling Authors." The show can be heard on many network radio channels as well as Sirius, etc. Many of America's best and most popular writers have been interviewed on the show, and I am very humbled and thankful to have been asked to appear. I had a terrific time with the hosts - Steve Murphy and Roger Clark. Both of these gentlemen were very well read, very insightful, and asked great questions which led to a unique and interesting discussion.

You can easily listen to the show by clicking here. Click on "Listen In" and first you will hear a great interview of Mark Wilensky, author of The Elementary Sense of Thomas Paine (about 15 minutes) and then my interview will follow. We had such a great time that the hosts asked me to come back on the show this month.

I hope you enjoy the show, and I really enjoyed being a part of it.
Posted by J David Petruzzi at 8:20 PM 1 comment: 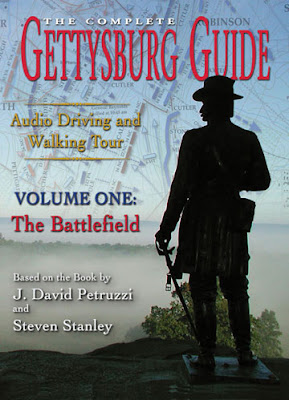 Audio Tours can be purchased through our website, and there is a special combo price for a tour and the book.

In Gettysburg stores, we've been hearing that the Tour is outselling all other audio tours by eight to one, and we are very grateful! We have been hearing wonderful comments and reviews from folks, and we're so glad that the tour, like the book, is helping folks to see and understand so much more of the battlefield.
Posted by J David Petruzzi at 3:45 PM 5 comments: