Yep, there's been a good deal of banter about the premier of a 2-hour docudrama called "Gettysburg," produced by Ridley and Tony Scott, on History channel this Memorial Day, May 30. Known for their well-deserved successes on the big screen, the Scotts appear to have brought their talents and skills to bear on the July 1863 battle to kick off History's commitment to programming for the sesquicentennial of the Civil War.

Lots of talk about the production indeed. I, like many, are eagerly anticipating the show. For one, it's good to see History actually get back to programming about... uh... history. History other than Ancient Aliens that is. I'm aware that shows like Swamp People and Ice Road Truckers have been immensely popular, but don't such programs belong on a separate channel? For the past several years I have been but one of a legion of voices, seemingly crying from the proverbial desert, that History get back to what it always did best - present programs about events that actually took place beyond five minutes ago.

For another, having "big" names such as the Scotts producing such a show seems to guarantee that it will have high production qualities. Such qualities are already evident in the two (that I am aware of thus far) trailer teasers that have been released on the internet and the channel itself. You can see lots of CGI, lots of artillery going off in the soldiers' faces, and captivating camera work. The budget for this production had to be considerable.

There is a lot of other talk about the show going around, however. The trailers have been quickly scrutinized for the accuracy of the uniform, equipment and scenery portrayals - in such productions dealing with anything about the Civil War, it's inevitable that amateur and professional historians will look closely to see if any egregious historical inaccuracies are evident.
And boy, there are actually quite a few seen in just the couple minutes' worth of the trailers.

In the trailer that can be seen on History's page here, a number of historical whoopsies show up. In the first few seconds, the Union soldier seen marching in column, then getting hit with a blast of artillery, is carrying his musket at shoulder-arms - but with the hammer at full cock. Not good. Dangerous and not regulation by any means.

A moment after that scene, a Union soldier is prominently featured wearing what appears to be a Hardee-style hat. On the front of his hat is pinned a brass insignia. Is it the familiar bugle? Nope. Perhaps the "US" insignia? Wrong again. Maybe his unit designation? Nuh-uh. On the hat can be seen the crossed rifles insignia. Not bad, if you ignore the well-known fact that the Army didn't begin using that particular insignia until 1875, ten full years after the end of the Civil War. During the Civil War, such an insignia hadn't even been imagined yet.

Another scene that just about everyone has been mentioning is the scene in which a Confederate soldier is seen climbing over a post-and-rail fence (perhaps the Emmitsburg Road fence during Pickett's Charge?) carrying the iconic Rebel battle flag. It's flapping in the humid breeze in all of its rectangular-shaped glory. So what's wrong with that, you say. Nothing, except for the fact that just about everyone who is well-versed in Gettysburg fact knows that the rectangular version of the flag was not carried or used by the Army of Northern Virginia at Gettysburg. The square version, yes ("the" battle flag). The rectangular version is the Second Confederate Navy Jack.

In a different, first trailer released by History, Union soldiers are seen jumping over what appears to be a poured concrete wall. What, at the historical battle, such a wall is intended to portray I haven't a clue. Hardee-style hats can also been seen with the incorrect side pinned-up.

These obvious inaccuracies can be seen in just the couple minutes of trailers, leading one to wonder what will be noted during the two hours of the full showing. Granted, folks with little or only a casual interest/knowledge of the Civil War or Gettysburg in particular will never notice such boo-boos. But for those who have noticed them, and roundly criticized them, the inaccuracies are leading to a couple questions: first, what (if any) historical consultants have been used for the production; and second, were actual reenactors used for the show?

The production is advertised as being made "in cooperation" with "several prominent Gettysburg historians." Their names, however, don't seem to be listed anywhere, and my search for them has turned up nothing. We may not know who these "historians" are until the credits roll at the end of the show. To be fair to whomever they may be, it could be that such historians were not consulted in the scenes that show the listed historical inaccuracies. Any historian of the period would assumedly have picked them out and corrected them pretty quickly.

The question about actual reenactors perhaps gets more the heart of the controversy. Say what you will about them (I am a reenactor in addition to an author/historian), nearly any Confederate reenactor who has been in the "hobby" for any decent length of time would know that the rectangular, Navy Jack battle flag would never be carried during any depiction involving Gettysburg. And any Union reenactor worth his salt (salt pork?) would know in a millisecond that the crossed-rifles insignia is incorrect for the period. You only see such insignia on those Chinese-made crappy children's kepis that are sold in stores geared for tourists (the ones beside the plastic rifles with rubber bayonets). And even the least experienced reenactor knows better than to march in column, at shoulder arms, with his musket on full cock.

That is why everyone is assuming that very few or no actual reenactors were used during the filming. It is being assumed, because of what is seen in these trailers, that volunteers or actors with no reenacting experienced were dressed up in uniforms and given their respective roles.

Because of the high and impressive production values that a team like the Scotts obviously bring to the show, one hopes that the accuracy will also be high. Over the past few years, we buffs, historians, and afficianados have had to suffer through some really lousy Gettysburg and Civil War productions. One that quickly comes to mind is the Military Channel's absolute dog of a show Gettysburg: The Battle That Changed America. This hour-long, painfully and horribly inaccurate drivel pops up every now and again, forcing folks who know anything about Gettysburg to resist the temptation to draw a nice warm bath and open up their veins. During just the first couple minutes of this festering pile of ridiculousness, the battle of Gettysburg supposedly opened when a small Confederate unit, minding their own business as they walked along a road near the town, were ambushed and fired upon by Federal infantry. And the Confederate infantry that opened the battle is purported to be that of Richard Ewell's Corps. It actually gets worse after that. The principal historical consultant on the show was reportedly Tom Carhart, which actually explains a great deal. Carhart knows so little about the facts of Gettysburg, I'm not sure that he even knows in which state it took place. His fictional fantasy about Gettysburg Lost Triumph - Lee's Real Plan at Gettysburg and Why It Failed tries to be a non-fiction work but does not rise to the challenge. Where there are no supporting facts, Carhart simply fabricates them, and apparently he did the same for the Military Channel show. I've always felt that if the CIA wanted to interrogate me, they needn't resort to waterboarding; just the mere threat of making me watch that show again would crack me like a songbird.

Back to History's Gettysburg. I join those who say that regardless of the obvious inaccuracies seen in the trailers, with the expectation of many more to be seen, if the high production values and captivating presentation brings many to want to study the battle, the war and the period, then it will have value. When inaccuracies are shown and become engrained in the audience's perceptions, however, it sets back the clock of teaching true history a couple decades or more. I don't think those silly crossed-rifles insignias will start showing up at reenactments, and soldiers won't begin thinking it's proper to march in formation at full-cock, but when these issues come up they will provide teaching moments. Sure, visitors to Little Round Top still ask rangers and Guides why Buster Kilrain's name isn't on the 20th Maine's monument, but in the grand scheme of things little harm is done by relatively minor historical boo-boos and dramatic license. If we can bring more folks to want to learn history - especially our children - then we work to explain the errors and move on to what's important. History. Real history.

I applaud the History channel for bringing this production to what promises to be a wide audience. Yes, I may be wincing every few minutes at something I see, and even watching with one eye closed at times, but unless we can ever actually take our cameras back in a time machine to 150 years ago, it'll never be perfect. Based on what we've seen lately, maybe for now it's just enough to hope that what we start seeing is better than what we've been getting.

Oh, did I address the modern rock music that accompanies the trailers? Let's leave that subject for my post-show review... 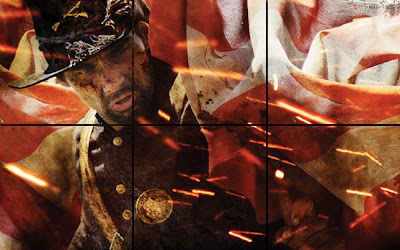 UPDATE: As seen in the current issue of Entertainment Weekly, above is a screen shot of a soldier from the show. Note the Hardee hat with the wrong side pinned up. And the crossed rifles insignia on the front of it. Oy.
Posted by J David Petruzzi at 12:27 PM