"The Rashness of That Hour" wins Robertson Prize 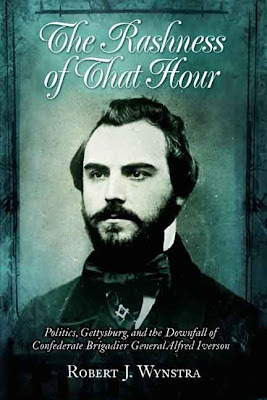 Deepest congratulations to my friend Rob Wynstra - his book "The Rashness of That Hour: Politics, Gettysburg, and the Downfall of Confederate Brigadier General Alfred Iverson" (Savas Beatie, 2010) has won the Dr. James I. Robertson Literary Prize for Confederate History Award!

Back in 2009, Rob approached me with his manuscript and asked me if I had any ideas about who might be interested in publishing it. I knew of Rob's work (I had seen an earlier version of the manuscript a number of years back when a publishing company I co-owned considered it) and his newest version was deeply researched, wonderfully written and broke a lot of new ground. Therefore, I thought of my publisher Ted Savas immediately. I contacted Ted and put the two of them in touch, and now it's simply terrific to see Rob's book receive the accolades it richly deserves.

Alfred Iverson is one of those infinitely interesting characters not only of Gettysburg, but the war and in American history itself. You'll enjoy Rob's discussion of Iverson's performance throughout the war, particularly at Gettysburg, and the details of his antebellum and post-war life. Typical to Savas Beatie books, Rob draws upon a wealth of newly-discovered and previously unused sources.

Congratulations Rob! Everyone interested in Gettysburg, Confederate units, the war, and history in general should acquire a copy of this book. Rob is currently working on a book about Robert Rodes' Division in the Gettysburg Campaign, to be published by Savas, and I eagerly anticipate that one as well.

UPDATE: Rob just informed me that the book has also won the prestigious Bachelder-Coddington Award, given each year to the best non-fiction work on Gettysburg... congrats again, Rob, and now I'm really jealous!
Posted by J David Petruzzi at 2:48 PM