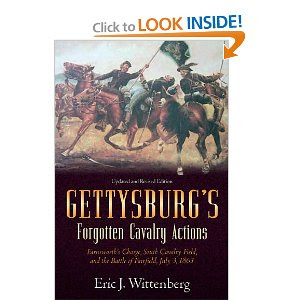 Probably a number of folks know that I cut my Civil War teeth on the cavalry back when I was very young, and the subject of cavalry during the Gettysburg Campaign in particular. Back in 1998 during one of my Gettysburg visits, I spotted a new book on the shelves of one of the local bookstores - "Gettysburg's Forgotten Cavalry Actions" by some dude named Wittenberg. I eagerly snapped it up and was excited to see that it contained the first detailed narratives at that time of the cavalry fights at South Cavalry Field and Fairfield. I had long studied those actions and agreed that they were indeed "forgotten" by most historians. Very deservedly, the book won the coveted Bachelder-Coddington award for the best new work on the Gettysburg battle.

The following year, I was a participant in an online Civil War internet chat room, which were really starting to ramp up in those days. One guy I started to chat with went by the chat name "Buford." With my interest in the cavalry, and having long studied the life and service of Union general John Buford, we started "chatting" on a regular basis. When we identified ourselves to the other, I discovered this "Buford" was that Wittenberg dude whose book I so thoroughly enjoyed. About that time, I began to create my old "BufordsBoys" website from primary source material I'd been gathering over the years, and Eric was a great contributor to it. Eric and I soon met in Gettysburg (where else?), we began giving tours together and sharing documentary resources, and after a few years we determined to begin writing some books together about the subjects we love. That began a researching and writing partnership that last until this day.

Back to Eric's first book. The original 1998 version, published then by Gettysburg's Thomas Publications, can be a bugger to find nowadays. It's been out of print for some time, and it was very popular when released. Its subject matter really filled a void in the scholarship, because hardly anyone else had paid much attention to, or wrote detailed narratives of, any of the dozens of cavalry actions that took place during the campaign. I know that those who have a copy of the original version, like myself, truly treasure the book and consider themselves lucky to have a copy.

Happily, publisher Savas Beatie has now worked with Eric to bring out this newly-revised, expanded and completely updated issue of the book. Eric and I have both gathered a wealth of new primary material on the cavalry actions, and he worked all of those into this new book as well as that which I was able to provide to him. Readers will find completely re-worked narratives of Wesley Merritt's and Judson Kilpatrick's battles at South Cavalry Field and the 6th US Cavalry's devastating fight at Fairfield, all on July 3. There are brand-new tours of the all these actions too, with new photographs. One of the aspects I loved about the original version of the book was Gettysburg ranger John Heiser's classic maps. Those are reproduced wonderfully in this new version, and includes a new one by John, too - he graciously snuck out of map retirement to produce it.

There is also an appendix section now, which includes a monograph written by Eric and I together. It deals with, to make a long story short, a silly, undocumented and historically inaccurate "alternate" theory about where Brig. Gen. Elon Farnsworth's Charge took place on the afternoon of July 3. All of the veterans and witnesses place it on what is known and South Cavalry Field, but a few years ago a Gettysburg Licensed Battlefield Guide proposed in print her theory that it actually took place about a half mile south of the battlefield. Such a theory never would have gained any traction had it not been for the fact that her writings were poorly vetted (or not vetted at all) and subsequently published in a couple of national magazines. No serious Gettysburg student gave her silliness any credibility, but once something is in print it's impossible to pull back. Thankfully, this inaccurate theory has pretty much died down, but because students and scholars will still encounter her original writings on the subject, we felt it was important to include our documented rebuttal to the theory. You'll be able to read it in its entirety in this new version of Eric's book and we hope that it will lay the subject to rest, as well as help students and scholars who may end up getting temporarily fooled by the theory until they see the actual documentation and evidence.

So, whether you already have the original version of this book or not, you'll absolutely enjoy Eric's updated and expanded version of his award-winning book. And if you were never able to get a copy of the first version, now is your chance to see why it was so lauded as a wonderful and much-needed detailed narrative of cavalry actions during the Gettysburg battle that so often get overlooked. For the full story of the battle, this book is indispensible and will become a treasured tome in either a brand-new way for you (if you don't have the original), or happily all over again.
Posted by J David Petruzzi at 12:30 PM