Last night I returned from a very busy, yet enjoyable trip to Gettysburg and nearby environs. The trip was mainly to give taped tours of the battle of Hunterstown and Fairfield for Bobby Housch for his GettysburgDaily website, but also for Steve Stanley and I to do some legwork for our next book, The Complete Antietam Guide. I couldn't leave until after work Friday, so I arrived in Gettysburg about 10 pm.

Buddy Jim Glessner, who manages The American History Store on Steinwehr Avenue, called me while I was on the road to let me know that two Licensed Battlefield Guides had heard I was coming to town and wanted to meet me. They were waiting for me at O'Rorkes. When I arrived, we had a very nice discussion about The Complete Gettysburg Guide, and they told Steve and I how much the guides enjoy the book. We were very honored by that - I have so much respect for the guides and park rangers, and the fact that they enjoy and recommend the book means a great deal to us. Everyone especially enjoys the tours of the cavalry actions - so little is generally known about them, and the book has given many folks much detail and so much to see. And the tours of the cemeteries and rock carvings has a lot of people talking - those are ones I keep hearing that folks really enjoy.

After an hour or so, Steve and I, along with Steve's fiance Kyrstie and Jim headed to The Mine for a few beers and some pizza. I'd eaten dinner but was starved by that time, so I had Dominos deliver to the bar. We had a nice time for a couple hours before I headed to my usual bunkhouse, Dave and Carol Moore's home on Herr's Ridge.

Steve and I had Saturday free, so we planned a trip to Antietam. After breakfast, Steve, Kyrstie, their friend Leigh Ann and I hopped in my truck and headed for Gettysburg's sister field. We got to the Visitor Center about 10:30, where we found ranger John Hoptak holding court behind the counter. John's a cool guy, besides being an Antietam expert. He always has a big smile on his face, and it was great to see him again. John told us about the new walking tours at the newly-acquired Roulette Farm, and we determined to walk the Federal Attack on the Sunken Road there. I asked if ranger Mannie Gentile was going to be around, and John told us that after his morning tour, he'd be in the VC that afternoon. We decided to come back later so we could see Mannie.

Steve also wanted to get some more pictures for the book, so we first headed to the Dunker Church. I enjoy going in there, and we sat in one of the pews for a while. A couple of Confederate living historians came in, and we talked for a while. Next was the Maryland monument, and Steve got some nice shots there. We then drove to the Mumma Cemetery, then the Roulette Farm. I hadn't been able to walk it since the NPS acquired it, so the four of us walked down the dirt road leading to the house and outbuildings. We crawled all over the place and I enjoyed seeing the house up close for the first time. Something I found in one of the sheds surprised me, though. Inside was a complete wooden original artillery limber and ammunition chest. It looks like it had been there since the battle. On the ground behind it was a rusty 3-inch Ordnance barrel. I wondered aloud how long it had been there and how it got there. I wondered if perhaps it was found on the field after the battle (one of the wheels was in pretty bad shape) and maybe Roulette had snatched it. Until the NPS got the property, maybe no one but the owners knew it was even there. I determined to ask someone when we got back to the VC, but of course I completely forgot later.

We then hiked the Federal Attack trail to the Sunken Road, which was a real eye opener. Coming up to the very high ridge overlooking the road, it made an impact on me how those Federal flags appearing over the ridge must have looked to the Rebs below. As always, walking the ground teaches everything - nothing replaces it. And the view of the Sunken Road below was one that I took in for quite some time, enjoying the educational and different view.

The girls convinced Steve and I that we just had to walk up the observation tower - easy for them, they're both in their 20's and Steve's and my knees have seen better days. The girls walked the Sunken Road to the tower, and Steve and I knew that in order to store what would be much-needed reserve energy, we drove the truck to the tower. By the time we got there, the ladies were already at the top. Youth is wasted on the young! Steve and I groaned... er... climbed our way to the top, and of course the view was spectacular as always. The sky was rich blue, and there wasn't a single cloud. It was a fabulous day. And wonderful for taking pictures. Steve got lots of shots from up there, and thinks maybe he might have a candidate for the cover of the Antietam Guide.

We walked back down the tower - I don't think anyone had to carry Steve or me, but I might be mistaken - and headed back to the Visitor Center to hopefully find Mannie. And find him we did. Mannie, dripping suave and coolness, was perched behind the counter edifying upon a group of visitors. He saw me out of the corner of his eye and threw me a "J.D...." in the middle of his conversation with the folks. When he was finished we had a great talk. I introduced him to Steve and the girls, and he gave us some great things to think about for the book. I took his comment that "much about Antietam that seems obvious, may not be so obvious" to heart. Lots of folks have strong opinions about McClellan, Lee, what could have been done or wasn't, and that events as transpired seems obvious to the point of near silliness... but the key is to look deeper. Thanks, Mannie, and I will keep that in mind as we get further along.

We said goodbye to Mannie, signed some copies of the Gettysburg Guide in the bookstore (they had only 3 copies left, and Steve had to take two more cases down to them today), and we then drove to the town of Sharpsburg for lunch. Since it was Anniversary Weekend, the Sharpsburg Festival was going on. I'd attended it several times before, and the food is great. Unfortunately, they'd already run out of chicken by the time we got there (about 1:30 pm). Rats! We settled for some hot dogs and sat on a rock wall to eat. We walked through the festival a bit, then drove to our final destination - Burnside's Bridge. 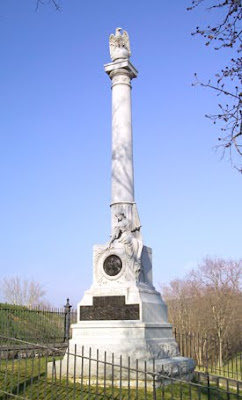 There were lots of people there, and Steve got more nice shots of the area. The skeeters were getting to us, though, so after about a half hour we walked back up the hill. But before leaving, I showed the gang the venerable William McKinley monument - what friend Steve Basic calls the silliest monument on any battlefield. Ha ha, I find it hard to argue with him. Dedicated to what was then a popular and lamented former President, the monument specifically commemorates the fact that then-Sgt. McKinley brought coffee and food to the boys on the line - exposing himself to fire in doing so. Of course, if the popular McKinley had never become President and subsequently assassinated, the monument would not exist. Of all the unsung acts of bravery that took place on Civil War battlefields, and have never been commemorated by a marker of any kind, it does indeed seem a monument to emotional reaction more than anything else. Ah well.

After a fulfilling, wonderful day at Antietam, we headed down the road for Harpers Ferry by way of Shepherdstown. I'll post on the rest of the trip tomorrow.
Posted by J David Petruzzi at 10:07 PM