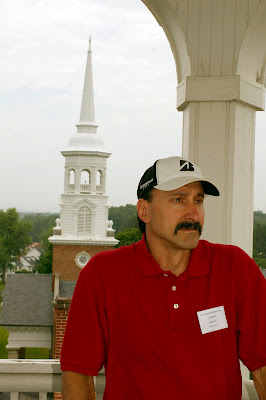 This past weekend I was in Gettysburg for the Gettysburg Discussion Group Muster, joining old and new friends for several beautiful days on the battlefields. Friday night we had a wonderful dinner at Mama Ventura's. Saturday afternoon I led a tour of the June 23, 1863 "Bushwacking" Incident at the Cashtown Pass, as well as some sights associated with the June 26 skirmishing between Early's Division and Pennsylvania Militia. On Sunday we got a wonderful, rare tour of Neill (Lost) Avenue by old friend Dean Shultz. I've taken that tour several times, but I enjoy each and every one of them, learning something new each time.
I must admit, though, that the highlight of my weekend (and maybe my year!) was getting to go up into the Lutheran Theological Seminary cupola for the first time in my life. Several years ago, the Lutheran Seminary and Adams County Historical Society opened the cupola to visitation again, once the attic steps were reinforced and safety was no longer a concern. A few times a year, it is available for limited visits to small groups, and when the opportunity came up this weekend, I jumped at the chance.
Prior to the tour, old buddy Wayne Motts (Executive Director of the ACHS) gave us a bit of history of the Seminary and its role during the war. We went down to the first floor, where he showed our group some very rare items. Then, those of us who registered and paid for the cupola tour were led up into it by Tim Smith. 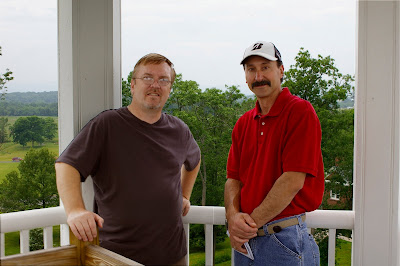 After walking up four flights of stairs, we finally reached the attic under the cupola. There, we walked up a little maze of wooden steps, opened the trap door, then up into the cupola itself.
I still have butterflies in my stomach from when I stepped out onto the cupola platform. Here was where General John Buford made a couple visits while watching the fighting on the morning of July 1, 1863. This is where Lt. Aaron Jerome, his signal officer, watched as General Henry Heth's Division approached along the Cashtown Pike, and from which he finally spotted General John Reynolds' arrival along the Emmitsburg Road. And the views from there were simply awesome.
Much of the cupola has been reconstructed following a fire during an early 1900's lightning strike, but it didn't detract from the solemn history of being up there. Unfortunately, a couple of very tall trees to the west obstruct much of the view along the Cashtown Pike (modern Rt. 30 West), but the ACHS is attempting to have those trees cut back a little. That will open up the view that Buford had that day. But from there, you can see the 5 miles to Hunterstown, beyond Big Round Top, and all the way to the Fairfield Gap some 8 miles to the southwest. The seven of us were in the cupola for nearly an hour as Tim pointed out many landmarks, and we discussed a plethora of topics. Steve Stanley took a bunch of photos of us and the sights from all directions.
Prior to the tour, Wayne had showed us the spot on the grounds where he believed Reynolds stood atop his horse as he yelled up to Buford, and I'm convinced he has it right. It's just off the northeast corner of the building. Due to the way the fenced lanes were on the grounds at the time of the battle (and the eastern facade was the front of the building at the time), and because you have limited visibility of the grounds immediately surrounding the building since the brick facades around the roof extend above the roof lines, I think Wayne's location is accurate. Wayne stood on that spot while we were in the cupola, and yelled up to me "What's the matter, John?" To which I dutifully yelled down "The devil's to pay!"
After all these years of studying Buford and his cavalry, the opportunity to get up in that cupola will stay with me for the rest of my life - and even that cupola is "battlefield terrain" that must be experienced to be truly understood.
Posted by J David Petruzzi at 3:36 PM